The mum-of-one started indoor trampolining venue Bounce with £200 that she borrowed from her husband after she missed out on a promotion five years ago.

Now more than 35,000 people attend Bounce classes every month, in over 205 franchises across the UK, Ireland, Australia and New Zealand.

Kimberlee, who is originally from Sydney, Australia but has lived in London for ten years and in Essex for three years, started the business by using her own savings.

Initially Kimberlee wanted to teach trampolining classes to make enough money to leave full-time work as a sales manager for an event company.

She used the £200 to buy eight second-hand trampolines and set up a basic website. 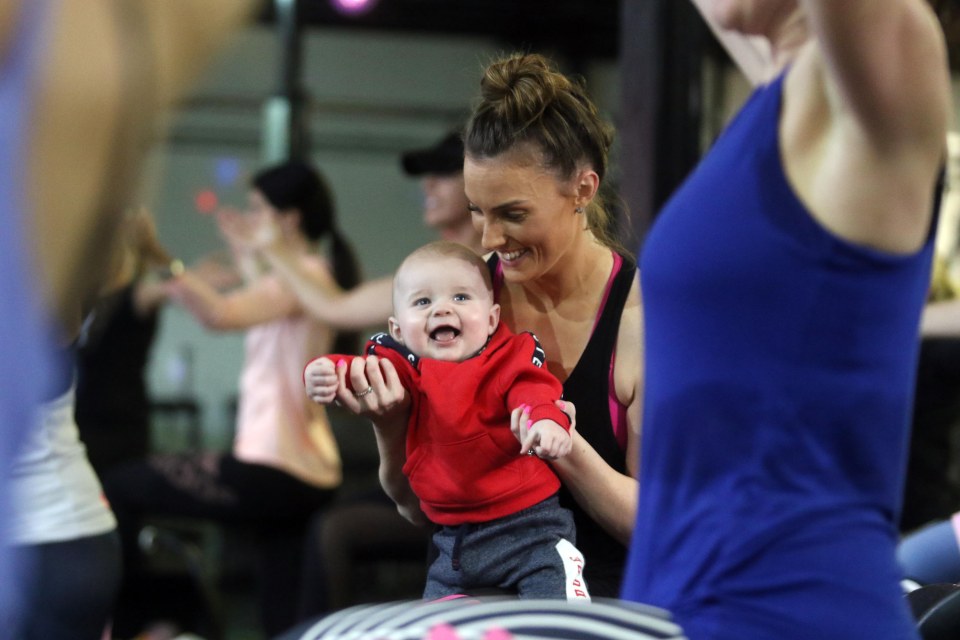 As a new mum, Kimberlee knew that parents can often find it difficult to commit time if they have to leave kids behind. So she created a child-friendly workout 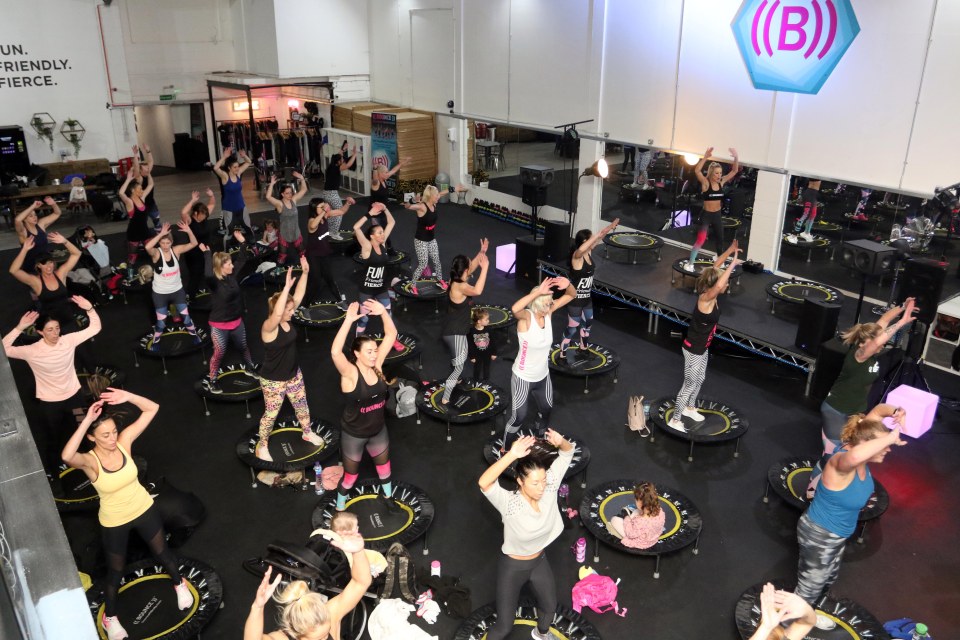 Then, she hired a room for free in a community centre in Harlow, Essex to use as a location for her first class.

She said: “I never set out to launch a company. I had no business plan and I did not seek investment. I’d simply decided to make my ideal workplace my own reality.

“I was focused on what I personally wanted from my work life: to be more passionate about what I do every day and to have flexible working hours operating on my own terms – and therefore giving myself every opportunity to earn from it what I put into it.”

The mum-of-one turned £200 into a company with a £3million a year turnover. Here are her tips

Kimbelee wanted to get back into shape after having a baby but around this time the theme in fitness was very aggressive exercise like “Insanity”, “Bootcamp” or “CrossFit”.

She said: “Those things didn’t really appeal to me. I wanted a hardcore workout but I believed many women were put-off by the war-like intensity just like me. I knew that rebounding was a rapid way to shed pounds as a cardio workout.

“I created high intensity, dance-choreographed routines performed on mini trampolines. Featuring pop music and performed in the dark with disco lights for a nightclub vibe, I created it initially just to suit me and everything I wanted from my workout.”

A year later her classes were full and she decided to create an instructor programme and turn Bounce into a franchise.

Franchising was ideal for Kimberlee because she had the idea but not the cash to back up her business.

The franchisee then pays an initial fee and then ongoing management service charges, which are often based on a percentage of annual turnover.

Kimberlee said: “In 2015 I decided to create the franchise model for Bounce and it was a really pivotal point in business for me.

“Firstly I just felt out of my depth around that time and although it was a good position to be in, I didn’t want to make the next steps if I couldn’t do the brand justice.” 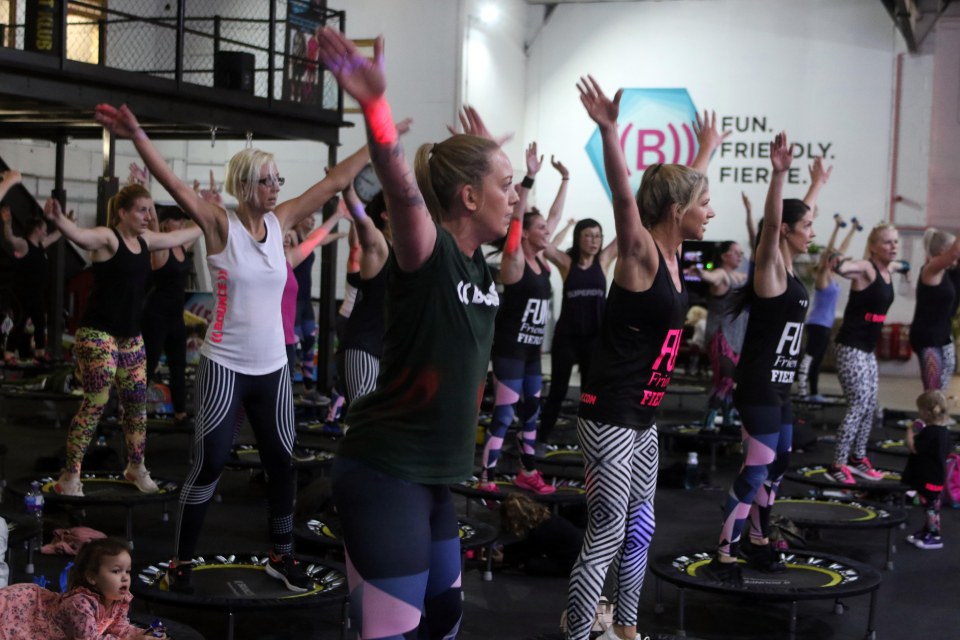 After Kim started Bounce in 2014, interest in the brand very quickly grew

“I consulted various different avenues to doing this, mainly through different law firms and the men I was speaking to either didn’t understand my vision.

“After various meetings I met with a Franchising specialist who happened to be female. She was not only willing to push me to think about things I didn’t know anything about in business, but she was openly proud of my idea. ”

Since then business has soared. The company now employs 16 people and moved to a 8,000 headquarters in Essex, where Kimberlee organises massive classes each week which can fit 100 trampolines.

The mum-of-one sites missing out on a promotion in her sales job where she has worked for eight years as the inspiration for starting Bounce.

She told the Sun Online: “I felt that it was a big travesty, I was in shock. My job pretty much defined me who I was at the time, so I was absolutely crushed.

“I fully intended on coming back after my maternity leave because I believed that being a mother wouldn’t affect my abilities as a manager.

Kimberlee had always been interested in fitness and exercise and had used group classes as a way to meet people when she first moved in the UK from Australia.

She said: “I did a bit of trampoline back home and I was considering getting back to it to lose some of my pregnancy weight.

“My idea was to make exercise more accessible for mums so my classes were ‘child friendly’ and parents could bring the kids along for free into the studio while they work out.”

Her husband Chris, who helped her out with marketing, photography and video, also joined the company as a director in 2016.

“I want other women to take the plunge”

Kimberlee hopes that her story will inspire other women to take the plunge and start a business.

She said: “I am most proud of the fact that our teaching programme, has helped so many women to become their own boss or prompted them to launch their own businesses.

“Women are so resilient and have so much to contribute to the business world and I’m glad I am doing my part to help them take this leap.”

“Thanks to my business I find it quite easy to switch between my entrepreneur and my mum duties. My son is a big part of the company, and we’ve been doing trampoline classes together.

“I feel very privileged that my work allows me to do that and I think that for him it’s great to have a happy, healthy, working mum. I really hope more women will have the opportunity to do that.”