The AM100 retailer, which now operates 12 sites across the South East, has created the new sports car retail facility in a building adjacent to its Hyundai Colchester business on Fox Street, Ardleigh.

AM reported a fortnight ago on Endeavour’s plans for the new franchise following a series of social media posts announcing the group’s intention to become a Lotus retailer.

“This iconic sports car business will be a welcome addition to the Endeavour customer offering and continues our successful relationship with the Geely Auto Group.

“The quality and customer focus of the Geely brands reflects our own values, and our investment in new sectors demonstrates the confidence we have in the fantastic products already available and which are in future development.

“I was very impressed when I visited the Lotus factory myself just a few weeks ago, and with the recent news that Phil Popham has been appointed to lead the brand, I can say for certain that it’s a truly exciting time to be involved with Lotus.” 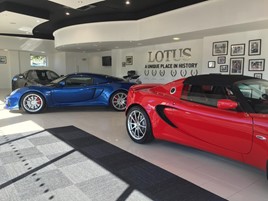 Endeavour Lotus Colchester is around 45 miles from Lotus Cars’ headquarters in Hethel, Norfolk. It is one of only three official Lotus dealers in East Anglia and is set to capitalise on the regional pride in the marque.

Endeavour’s new Lotus franchise is staffed by a dedicated sales manager and two specialist technicians for service and aftersales.

Alongside the presentation of new cars in the showroom, the Colchester dealership will offer a comprehensive range of official parts and accessories and has outside is space for 30 specialist cars to be displayed from approved-used stock, a statement from the group revealed.

It also said that the group anticipates that there “could be beneficial cross-selling between the sites”.

The group said that those in the market for high-quality family transport consider a world-renowned sports car as their weekend wheels – or vice versa.

Endeavour made the decision to invest in the Geely-owned Lotus Cars franchise following its success with the Volvo brand in the South East.