New research on UK franchising has revealed a business sector operating at record heights, with much of the recent growth driven by female entrepreneurs and the under-30s. There are now nearly 50,000 franchise businesses collectively contributing over £17bn and 710,000 jobs to the country’s economy, according to data from the British Franchise Association (bfa) and NatWest in the 2018 bfa NatWest Franchise Survey.

In the last two years, more than one-quarter of franchisees starting their business were aged 30 or under at launch, and 37% of all newer franchisees are women.

The infographic below highlights some of the key stats. 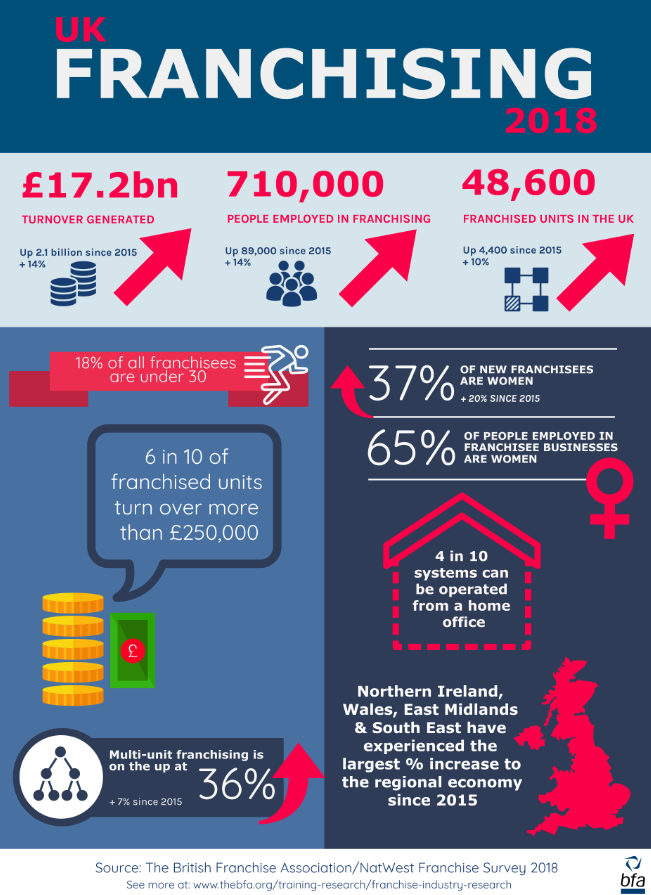 Pip Wilkins, the bfa’s chief executive, said: “Thanks to franchising, more people are starting their own business and more jobs are being created. These figures show that whatever your background, with the right attitude and ambition you can thrive.

“The rate of female entrepreneurship is well above the national SME average, testament to the franchise community’s drive to empower women into business. We’ve come a long way since 2005, when more than 80% of newcomers were male.

“And the sharp increase in under-30s starting their own business is thanks to the franchise model bridging the gap between experience and ambition. I’m delighted to see so many younger people realising they have a choice between going it alone or being employed.”

Related: How franchising enables the next generation of entrepreneurs

The data also revealed the continuation of a long-term trend: around 90% of franchisees – who own and operate their business using the brand, systems and support of a larger company – have reported profitability annually for over 20 years running.

Wilkins added: “Franchising now covers a huge range of businesses, from hair care to healthcare, but is still to reach anything like the levels seen in the US for example. With so many younger people now entering the sector, the future is in good hands.”