Kia Motors has pulled away from the car manufacturer pack to become the highest rated franchise among UK car dealers in the NFDA Dealer Attitude Survey Summer 2018 – reclaiming its title from a faltering Mercedes-Benz.

Kia Motors, the Korean manufacturer tied with Mercedes-Benz and Toyota as the top-rated OEM overall in the National Franchised Dealers Association’s Winter 2017/18 survey with a score of 8.9-out-of-ten when dealers were asked to deliver and ‘overall’ rating six months ago, but scored 9.1 to claim an outright victory this time around.

Among the Kia Motors franchise’s strengths, car retailers who responded to the survey rated the frequency of introduction of new models (9.3), the ability to do business with the manufacturer of a day-to-day basis (9.3), and satisfaction that its dealer standards are fair and reasonable (9.0), most highly.

Toyota maintained its 8.9 score in second place, with Lexus rising into third with an 8.7 (Winter: 8.6) as Mercedes Benz slumped, showing the most pronounced netgative points swing of any manufacturer since the last survey to end a recent run of high scores with an overall rating of 6.7 which left it in eighth place.

Mini and Mazda tied for fourth place with 7.5 ratings.

Citroen was the only brand to break up an FCA Group-dominated bottom of the rankings, the PSA Group brand finishing joint second-bottom with an overall rating of 3.4 alongside Jeep.

The overall rating among manufacturer franchises rose by 0.4 to 5.7, however, a trend that NFDA director Sue Robinson described as “encouraging to see”.

She added: “Positively, there has been a general increment in satisfaction levels across the key questions of the survey. Additionally, although some of the top performers had lower scores than six months ago, we are pleased to see that the majority of the bottom networks have experienced solid improvements.

“Going forward, it is vital that the relationships between retailers and manufacturers remain as healthy and constructive as possible and we will continue to liaise with manufacturers to ensure that the interests of our members are safeguarded”.

The NFDA carries out the Dealer Attitude Survey on a biannual basis. The results of the survey indicate potential issues affecting the dealer/manufacturer relationship and highlight where there are healthy working relationships in place.

In summer 2018, NFDA surveyed 30 franchise networks and received 1,715 responses from dealers, equating to a 40% response rate.

With an overall average of 8.5 points across the whole survey, Kia had the highest average score across all questions.

Toyota and Lexus followed with 8.2 points. At the other end of the table, Fiat (4.2), Jeep (3.8) and Alfa Romeo (3.2) had the lowest scores although they have all improved from six months ago.

The NFDA was able to identify Mitsubishi as the most improved franchised network with an overall increase of 60.7 points across all the questions of the survey partly due to the impressive 98% response rate.

Robinson said: “The NFDA Dealer Attitude Survey is a crucial barometer of the status of working relationships in the automotive sector and we are pleased to see that manufacturers continue to place enormous value on the survey.” 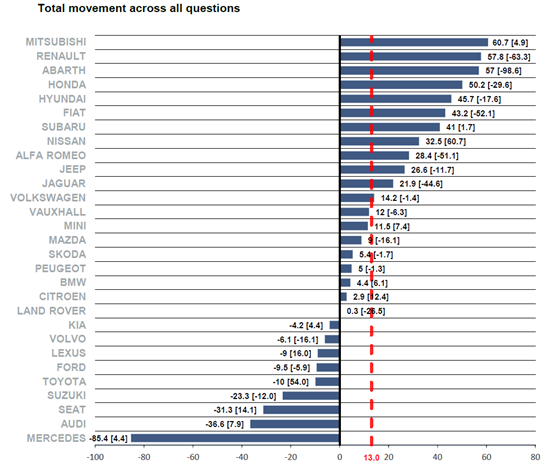