Home Where next for the UK economy and sterling?

Where next for the UK economy and sterling?
8 June 2018by Marketing It is hard to avoid the impression that the UK economy is continuing to show elements of weakness. Even the latest services purchasing managers index (PMI), which rebounded to 54 in May (a three-month high), is still weaker than the previous peaks of February 2018 and October 2017. This creates what would be known in technical analysis as a ‘lower high’, usually a negative sign. Indeed, the component parts of the index provided little room for cheer, as new business volume grew at a weak rate and employment growth posted the second weakest reading since March 2017.

Speaking of March 2017, UK inflation fell back in April 2018 to 2.4% year-on-year, the lowest reading since the third month of 2017. A further worrying sign was the weakness in the core consumer price index (CPI) reading, which strips out the more volatile food and energy readings. This fell to 2.1% for April, from 2.3% in March, and is also the lowest reading since March 2017.

Gross domestic product (GDP) readings provide little comfort either. UK growth has been on a steady downward track since the first quarter (Q1) of 2017, falling from 2.1% year-on-year to 1.2% for the first three months of 2018. Quarter-on-quarter, the growth rate was just 0.1%, the lowest since the 0.1% contraction in growth in the final quarter of 2012.

So what’s the good news, if there is any? Well, the Bank of England (BoE) will be pleased that the pound has dropped sharply against the US dollar. A fall in the currency is equivalent to a cut in interest rates, which will likely result in higher inflation. Imports rise in the price, while exports will become more competitive, helping to boost economic growth. While the BoE continues to proclaim its commitment to higher rates, using the word ‘soon’ to describe the timetable for rate rises, there is still little real sign that the Monetary Policy Committee (MPC) is particularly keen on the idea, preferring to talk about it rather than actually do anything.

Plus, the UK appears to be heading for the softest of soft Brexits, as the Eurosceptics lose control of the process and allow the Prime Minister to steer a middle course. While this might not be quite the idea of ‘taking back control’ that many Leavers had, an initial modest disengagement from Europe will preserve a significant amount of continuity, while still providing for a greater divergence in the much longer term.

Looking away from the UK for a moment, the weakness in eurozone economic data also provides some reason for caution. The ‘euroboom’ of 2017 has likely ended, although an immediate contraction in growth is unlikely. Being our closest trading partner, the eurozone’s weakness will be felt in UK activity too, so the growth figures may reflect this is due course.

One cause for concern remains higher petrol prices, which while not as high as late 2015 are still rising, with the weaker pound providing a further upward push. As some have noted, the BoE is reaping what it has sown, with its indecision on interest rate increases weakening sterling and putting a squeeze on consumer spending.

What does this mean for GBP/USD? The pair has fallen back sharply since mid-April, but this is within the context of a steady climb from the 2017 nadir below $1.20. A short-term rebound is entirely plausible, given how negative on the outlook investors have become since Mark Carney talked down the prospect of rate rises back in April. But with the dollar still strong, and months of Brexit negotiations ahead, the pair’s rebound could be short-lived. 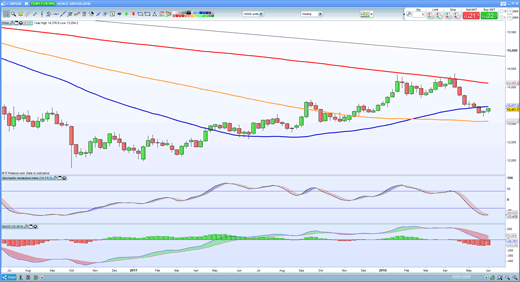