Under this partnership, Freshly Chopped plans to open 120 new outlets over the next five years in Sweden, Belgium, France, Germany, Denmark and the Netherlands.

Established in 2012 in the Irish capital of Dublin, Freshly Chopped currently operates more than 60 stores that are located in the UK, Cyprus and Ireland.

The company offers a wide range of delicacies including salads, burrito, ACAI Bowls and smoothies.

As per the agreement, FFF will hold Freshly Chopped’s master franchise rights until 2032.

The first outlet is expected to open in February next year in the Dutch city of Leiden, with seven more planned to open in the same year across the country.

Over the next five years, company as well as franchise restaurants will be launched in France, Germany, Belgium, Denmark and Sweden.

Freshly Chopped founder and CEO Brian Lee said: “Signing today’s deal to bring the brand to six new countries is a great moment for the company and another important milestone on its global rollout.

“Without a doubt, 2020 and 2021 have been difficult years for everyone but we know that whatever happens, customers across the world want convenient, fresh, healthy food and there is no brand better than Freshly Chopped at meeting this demand.” Freshly Chopped has today announced the opening of two new stores in Ireland and the UK.

The two new outlets will be located at Junction 14 in Monasterevin, Co Kildare, and HGS The Stage in Leicester in the UK, creating 10 jobs per outlet.

“When we founded Freshly Chopped in 2012, our mission was to make it as easy as possible for people to eat healthily and it’s encouraging that in spite of all that is happening we are continuing on this mission,” said Brian Lee, co-founder and managing director of Chopped.

“There’s no doubt it has been a challenging few months for everyone but these two new outlets represent a belief that in a post-Covid world, people will want fresh, healthy food on the go even more.

Freshly Chopped’s new outlet in HGS The Stage in Leicester will be the only food offering in a forecourt opened by Joe Hockenhall and his son Peter of Hockenhall Garages Ltd.

“We believe there is still massive potential for growth in the UK. With thousands of motorists passing each day, our new outlet in Leicester will act as a shop window for more franchisees in the UK to get to know our offering better,” Lee addd.

The company said that Freshly Chopped’s new outlet in Co Kildare is the third franchise outlet taken by The Lidon Group. Healthy fast-food chain Freshly Chopped has opened its first outlet in the UK as it assesses potential Brexit impact before further expansion.

The new store in Manchester marks the franchise’s 60th store in total; with recent hubs opening this year including Drogheda and Cavan.

Co-founder and managing director Brian Lee said it took the company longer than expected to move into the UK market “mainly because of the uncertainty created by Brexit”.

“We’re confident though that we have found the right location and crucially that we have the right infrastructure in place to deliver the foundation we need to grow the brand in the UK,” he said.

“We see this first store as a pilot to learn more about the market and assess how Brexit impacts on the sector before committing to opening more stores in England.”

Mr Lee said that Freshly Chopped will remain cautious with its rollout strategy and have created what is described as a “Brexit proofed” supply chain.

The new company owned store, which is located in Piccadilly Plaza, will also see Cork’s Rebel Chilli introduced to the UK.

It represents a significant development in the company’s strategy, which has up until now predominantly focused on opening stores. Freshly Chopped, a salad bar chain is working on its next supermarket products – and a potential foray into China.

AFTER MONTHS OF waiting to unveil his company’s first foray into Britain, Brian Lee from Freshly Chopped is about to see that patience come to fruition.

In less than two weeks, the salad bar chain will open the doors to its Manchester store – the 60th outlet for the brand, but a watershed in its ambitions to become a force outside its native Ireland.

“We put a lot of eggs into that basket now to make that work,” Lee told Fora.

“That will be our first one (in Britain) and it’s a company-owned store – it’s set up to open up our supply chains and get our team on the ground for future training before we launch our franchise platform into the UK.”

To date, the vast majority of the company’s expansion has come in Ireland: with the exception of two stores in Cyprus, all its existing outlets are spread across the island. Around four-fifths of the stores are franchise-owned.

That focus is about to change as its growth in the Republic and Northern Ireland naturally begins to slow, and its ambitions turn to the UK mainland and further afield.

“We opened 21 stores last year … the growth won’t be anywhere near matching that in Ireland; we’re going to focus more this year on our standards and how we can improve on all aspects of our business,” Lee said.

“If we were able to match the success that we’ve done here, there’s room for probably 200 stores (in Britain). Manchester is a launch pad for us to dip our toe in the market and see where we go from here.”

Since Freshly Chopped was launched by Lee and co-founder Andy Chen in 2012, it has expanded to become the country’s second-largest indigenous fast-food chain by outlet numbers – behind only Pat McDonagh’s Supermac’s.

Much of that rapid-fire growth has come from partnering with major retailers and hospitality outfits, like the Mount Charles Group in Northern Ireland, the BWG Group, which oversees the Spar, Mace and Londis convenience store chains, and Maxol. 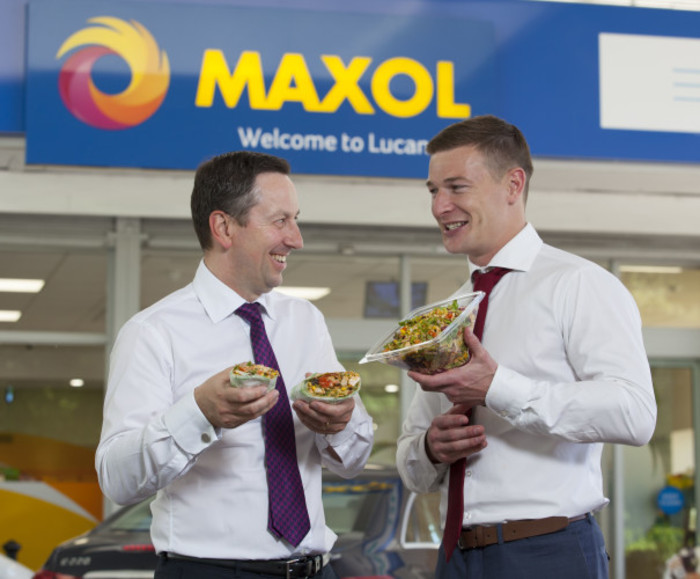 However with a presence across Ireland and now Britain, Freshly Chopped has been forced to deal with the possibility of a hard Brexit that could disrupt supplies of fresh produce into the UK from Europe – and Ireland from the UK.

“You have to be cautious – but you also have to take risks, to a certain degree. If we hang around waiting on Brexit and what the ultimate outcome is going to be, we won’t do any business,” Lee said.

In the case of its new British operation, the company had been “ringfenced” as much as possible, using local produce wherever it was available.

However the more limited list of ingredients that were grown in Ireland meant if the predicted Brexit-related price-rises materialised then the company could be forced into doing without some fresh foodstuffs.

“If it becomes unfeasible to put a product on the menu, then we’ll have to take it off and put on something else that equally complements the meal,” Lee said.

“We can only work with what we have, the customer isn’t going to pay silly money for some products – and we can’t expect them to do that either.”

In November, Freshly Chopped launched its first supermarket range with the ‘at home’ range of pre-bagged salad leaves going on sale in Dunnes Stores supermarkets.

Lee said full-year sales of the bags were expected to hit two million, with another supermarket chain due to start selling the products shortly.

The company also planned to offer its three most popular dressings through retail outlets, while it was also looking at a range of snack products.

“The store will always be the core of the business – these are add-ons, things to drive a little bit more revenue,” Lee said.

“It’s more about putting the brand out there, so that first thing in the morning the customer opens the fridge and they see our brand.”

While Lee declined to give revenue figures for the company, accounts for the firm’s main Irish operation show it has been consistently in the black, with accumulated profits sitting on €860,000 at the end of 2017.

It employs nearly 300 people directly, while there are around another 700 staff working in its franchises.

Lee said the Cypriot operation had been “a nice test” for its international franchise, and the company was looking further afield for partners to take up master franchise agreements and help the brand expand.

“Hotter climates and countries are going to be ideal, and also any country that would be a similar culture. Australia would be one and we’re talking to a couple of parties down there, although nothing has been set in stone,” he said.

“We’re looking further afield even at China – my business partner is Chinese, so we’re exploring all avenues. We don’t want to be just tied to Ireland.” Irish salad chain Freshly Chopped has announced it is set to open a new branch in Northern Ireland as part of an expansion of 10 new stores.

Its branch in Northern Ireland will open at Ulster University’s Belfast campus this weekend in conjunction with outsourcing giant the Mount Charles Group, making it the chain’s 50th outlet overall.

The store will create 15 jobs, which will be a mixture of full-time and part-time positions.

A total of six branches of Freshly Chopped are set to open across Donegal and Northern Ireland, with its branch on Donegall Square set to open on November 12.

The 10-store expansion announced on Wednesday will see 150 jobs created in total, with branches also opening in the Republic, Cyprus, and Great Britain – with all of them expected to be open by Christmas.

The expansion comes on the back of the group’s successful franchise programme, and strategic partnerships with BWG, Maxol, the Mount Charles Group, Aramark as well as a new deal with Corrib Oil.

“We are delighted to be accelerating our growth across four different markets,” Brian Lee, co-founder and MD of Freshly Chopped, said.

“These 10 new stores showcase the success of our growth programme that we have used to continue the revolution in healthy fast food.”

Chopped has undergone a rapid expansion over the past two years, more than doubling its number of employees and stores across various international locations.